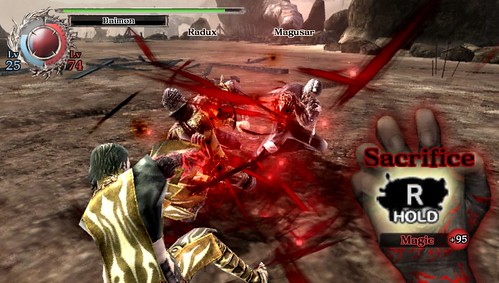 We all have those games that we just find ourselves coming back to one way or another, whether it be playing it long after you're -done- with it, or whether you just find yourself mentally comparing it to other games when you start playing it, or however it's done.  For Chance, it's Dragon's Crown.  For plenty of others out there, I'm sure it's Persona 4: The Golden.  Or perhaps it's Sorcery Saga: The Curse of the Great Curry God, Ys: Memories of Celceta, Ragnarok Odyssey (perhaps the Ace version), Disgaea 3: Absence of Detention, Conception 2: Children of the Seven Stars, Demon Gaze, Atelier Meruru or Totori Plus, Toukiden: The Age of Demons or any other number of games that offer long, engrossing experiences on the Vita.

For me, it's always been Soul Sacrifice.

With the introduction of Soul Sacrifice Delta to the Playstation Store (it's digital-only, it seems) and the stars aligning to deliver unto me my 64 gig memory card for my Vita far before the May 30th - June 20th window I was offered (likely because who knows with Customs), it was time.  Time to go back to the game I've said a hundred times that I'd rather be playing, or that I just -want- to be playing it.  So as I've been filling up my 64 Gig stick with games, I've turned to it and have been playing it again.

I'm not sure just what it is about the game that I love, but I'm inexorably drawn to it.  I want to conquer all that it has to offer (except the Forgotten Pacts, fuuuuuck thaaaaaaat) and then do it all over again in Delta, which, from what I've heard, greatly expands the universe and the setting of the game, which is exactly what I wanted.  It's not quite a world I can explore just yet, but it's bigger thematically and that counts for something.  I'm not going to know just by how much until I start it, and I've still got a grip of content to wrangle with on the vanilla game, but it's definitely something to look forward to.

In all honesty, though, I wish I could have people enjoy the game as I do.  I wish I could quantify just what about it makes me grin, what gets me pumped up and excited, what makes me feel like I'm bending the game over my knee without cheesing or breaking it.  I say it's dodge-rolling out of the way of a charge attack, turning around and unloading three volleys of arrows into my foe before he gets up.  I say it's sitting back and launching an egg bomb right in the cursed part of an archfiend and breaking it to expose it to some massive damage for the next five or so seconds.  I say it's throwing on armor and not even getting hit while I mercilessly slaughter a tier of monster that, at one point, was nigh-impossible for me to kill.  I say all of these things and I just get blank stares or "Well, it's good that you liked it" or something of that sort.

I wish everyone else played the same game that I did, I guess, because the lack of love for the series really, really bums me out.  Not that it's reviled, but rather that I think it's -big-, that it's a big deal game, a fantastic experience and it's something that I would suggest to anyone with a Vita.  This is not universally agreed upon like Gravity Rush or Uncharted: Golden Abyss (for the most part) or Persona 4 Golden are.  To me, it should be, because I've gotten so much fun out of this goddamn game, it's incredible.

But, well, that's just how it goes, I suppose.

Dragon's Dogma:
-Rook's Folly
-The Half-Finished Request
-The Fall of the Arisen

What's all this, then?

This is going to be many things, but first and foremost, it is, quite simply and unsurprisingly, a place for me to write. Sometimes about video games, sometimes about movies, and other times, just to write out mini-stories and the like. As an outlet for me, it will likely reflect how I am; at times it will be entertaining, and other times it will be informative. I just hope that every time it's interesting at the very least.

The current goal is a post every other day to settle myself in; eventually, I will seek to post every day, if just to raise an inquiry that I've found I've tripped over most of that day, or to retell an amusing, or perhaps less so, tale from the day. I find that I can be long-winded at times, so perhaps this will be less of a concern than I imagine!

While it would make sense to change this to grow as "Kupowered" does, I hope to keep this just as it is and, sometime down the road, re-read it with a slight chuckle and mumble to myself, "I did it." So take this as a mission statement, if you will, and we will see how it works out!

Want to drop me a message?

Kupowered now has a dedicated email address: kupowered[at]gmail[dot]com. I'll try and check it daily, so if you want to leave me some feedback, ask me a question or give me a heads-up on something, go for it!

Big Enough To Need This Now

A Look Back: In lieu of reviews (which I might do in the future), these posts will be fond recollections of older games from my past, telling you why I believe them to be good and why you might be interested in playing them.
Giant Robot On: I like Giant Robots. Who doesn't? These posts will always be talking about something with Giant Robots in it, be it video games or anime or movies.
Less-Short Story: On occasion, inspiration will hit me and I'll want to write a short story or, as the name implies, expand on a story from my old Ficly. That will be these posts.
LittleBigThings: In these posts, I will be discussing (read: gushing about) things in the LittleBigPlanet series of games, from the game itself, to user-created levels, to my own adventures in Craftworld.
Music!: Fairly self-Explanatory. In these posts, I will talk (gush) about music I like, and possibly music that I don't care for.
Popcorn On: These posts will revolve around movies that I've seen that are just great in one way or another. The aim is to give you enough to interest you into seeing it without giving too much so that you feel you know what's going to happen.
Quick Note: These will usually be, as can be expected, short posts to keep in touch with the blog and it's readers if I'm not prepared for a full post or if I'm updating on a past post.
Ragequit: Completely opposite of A Look Back, these posts will be about the few games I've had to quit playing because they just weren't fun. (Or that I might have finished, but still hated.)

There will likely be more types of posts added in the future that will be explained here.